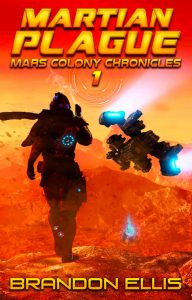 Humans have been kicked off Earth by an invading alien race. The survivors of the invasion live in bubble cities in the Mars colonies. Our lead character, Ozzy Mack, a “criminal archeologist,” is paid well to locate and recover artifacts from an ancient Martian civilization. Think of him kind of like a store brand Indiana Jones with less respect for the law. Maybe he’s more like the bad guy from Raiders of the Lost Ark. You know who I’m talking about. The one that’s not quite as smart or strong as Indiana that works with the Nazis. Evil creepazoid. That one.

Ellis’s vision of the future is reminiscent of pulp science fiction of yesteryear. A mix of realistic technology, flights of fancy, and just the unexplained, Martian Plague forces you to suspend disbelief. This isn’t necessarily bad as it frees Ellis to focus on the story and not the technology. How humans survive the harsh realities of life on Mars, from the dome cities to the transportation between them, is believable if not realistic. The same can be said for alien biology.

The story itself is good but not great. Ellis plays well with both the alien invasion and Mars colonies tropes. However, he comes up short with his characters. They are all pretty flat except for Ozzy and Josi, his government-appointed partner. Josi evolves in very predictable ways. And Ozzy? What are his motivations? Someone blackmailing him? Keeping his daughter safe? Pure, unadulterated greed? While they are all essential to his character, Ellis doesn’t do a perfect balancing act. Ozzy never does anything so out of character that it takes you out of the story, but at the same time, he doesn’t do anything genuinely extraordinary either.

It’s a fun science fiction adventure. If you’re looking for an easy read that’s pretty much nonstop action, you will enjoy this book.