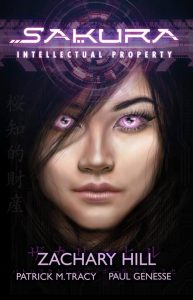 Sakura: Intellectual Property is a cyberpunk novel set in near-future Japan featuring the heavy metal star turned assassin sentient android Sakura. The country has extremely high poverty rates; most of the populace is retreating further into an augmented reality world powered by the all-powerful American corporation simply called the Mall. Sakura must fight for her freedom and the freedom of her people.

Zachary Hill wrote the first draft of Sakura: Intellectual Property. He intended it to be his love letter to heavy metal and Japanese culture. Sadly, Hill passed before he could finish the novel. His friends Patrick Tracy and Paul Genesee finished the book to honor him.

Every chapter starts with a metal “playlist,” consisting of bands from Metallica to Baby Metal. In the Kindle edition, the playlist is an image that links to the playlist on YouTube. Some of the original songs from the novel have also been written and recorded as part of these playlists. Sakura has metal songs running in her mind as a soundtrack to her life. Listening to these songs while reading the novel puts you in the same headspace as Sakura.

Sakura also fancies herself a bit of visual artist. As new essential characters are introduced a sketch of them is displayed. These sketches are supposed to be digital sketches by Sakura herself. They do help with visualizing the different characters, but they can look like police sketches.

Throughout the novel, Sakura grapples with her humanity. Her mind is faster than a human’s. She can accomplish multiple complicated tasks simultaneously. Her body is nigh indestructible. She has superhuman strength. But she has human-like emotions. Her desire to be accepted leads her to make some questionable decisions.

As an android, Sakura is frequently treated as an object. As a female-presenting android, she is frequently treated as a sex object. She doesn’t like this much. Hill uses this aspect to explore Sakura’s sexuality, both on stage and off. Offstage, she isn’t interested in sex. In a conversation that is a little out of character, Sakura describes herself as sapiosexual, attracted to people’s intelligence. Despite this, she shows no interest at all in sex. On stage, she tries to balance her disinterest in, and even repulsion to, sex with performance. This comes to a head in a performance where she dances in her underwear. She believes this “wasn’t sex, only theater.” This is jarring as it’s out of character for her.

If you like cyberpunk stories, you’ll enjoy Sakura: Intellectual Property. Extensive knowledge of metal music and Japanese culture may enhance your enjoyment of the story but is not necessary. I have a passing familiarity with both, by no means am I an expert, and that knowledge was enough to understand what was going on.